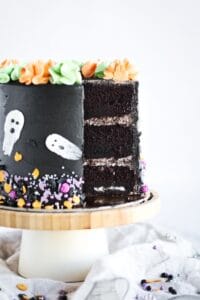 Enjoy the spookiest night of the year with the fluffiest cake! This Chocolate Oreo Cake is every chocoholic's dream. Three layers of perfect fluffy chocolate cake paired with delicious Oreo Buttercream – you'll LOVE it!

Halloween is just around the corner! Are you excited? Seeing that not everybody likes pumpkin flavour, I decided to make a Chocolate Oreo Cake because – who doesn't like Oreos? I mean, c'mon.

Aaaand, I really wanted to get to the bottom of chocolate cakes. Now, I tried a lot of recipes, some were from my fellow blogger friends, as well. And, I can't say that any of them was bad. Really, I can't.

Some actually had a really nice texture, fluffiness (is that a word?) and they were really moist. Most of the people found them very tasty.

But there was just this thing that bothered me and that is –  the AFTERTASTE. I was pretty sure that I don't really like chocolate cakes, except my Cherry Chocolate Cake - which is more fudgy and brownie-like. And who doesn't like brownies, right? I know I am. 😉

Back to chocolate cake recipes, ahemm.

Every one of the cakes had the same aftertaste. Hm… metallic? Soapy? I can't even describe it, but it was a bad one.

I wondered if there was something wrong with my ingredients, since I'm from Croatia (Europe) and most of the recipes I tried came from people living in the United States or Canada. But everything seemed spot on. So what was the problem?

And then one day, while I was analyzing the recipes, it hit me… every one of these recipes had an enormous amount of baking soda in them. That's exactly what they tasted like.

That's the reason why those cakes had a bad aftertaste. It seemed like there's just something not quite right with them. Or maybe I'm just too sensitive? I don't know. What I do know is – I don't like to taste baking soda in my desserts.

I've discovered and learnt a lot while reading about leavening agents and their effect in baking. I won't smother you with information YET (I'm planning on doing a Baking Basics separate post), but I will share some basic conclusions. Bear with me. Explore your inner nerdiness!

This is something that gets discussed A LOT in the baking world. There are often questions like:
1. Can I substitute baking soda for baking powder?
2. Aren't they the same thing? (No, they are not)
3. What's the difference between them?
4. Why some bakers use both in a recipe?

First of all, both baking soda and baking powder are chemical leavening agents. In addition, they are used to lift baked goods such as cakes, cookies etc. To simplify it, they make things fluffy and airy, instead of dense and heavy.

Baking soda NEEDS some kind of an acidic ingredient (natural cocoa powder, lemon juice, vinegar, buttermilk...) to make carbon dioxide and thus, make your cake rise. Baking powder represents a combination of baking soda and some kind of dry acidic element (most likely cream of tartar). It's also often double-acting, unlike baking soda. But, more on that some other time soon.

For the time being, it's important that you understand that they are definitely NOT THE SAME THING. And you can't substitute one for another just like that. Personally, I prefer using baking powder in cakes because... Someone already came up with the perfect ratio of alkaline and acidic ingredients to produce carbon dioxide. Why the heck should I mess with that? Lol.

What about cocoa powder?

That's a whole 'nother topic, which I'm excited to talk about when the time comes, I just need to test some things to have all the necessary information for YOU. 🙂

The latter is alkalized, which means it's not acidic. Furthermore, it's darker in colour and you'll often find that it's "fat-reduced". From personal experience, this kind of cocoa powder has a much more intense chocolate flavour.

On the other hand, natural cocoa powder is usually used with baking soda, it's lighter in colour, and it was actually his reaction with baking soda and white vinegar that produced reddish colour in a Red Velvet Cake - hence the name. 😉

You can use natural cocoa powder in a recipe instead of dutch-processed one, but not the other way around - because of leavening agents.

Your cakes may become flat, dense and  - they can have that soapy, baking soda taste, which for me personally is THE WORST.

Why should I use hot water or hot coffee?

You'll find that most chocolate cake recipes have some kind of hot liquid in them. It's usually hot water or hot coffee. That's because you need TO BLOOM cocoa powder.

In other words, when mixed with hot liquid, cocoa powder releases the best chocolate flavour. It also makes sure that there are no lumps and it makes everything smooth, beautiful and extra chocolatey.

Some prefer coffee over water because it's said that coffee enhances the chocolate flavour. But, to be honest, I haven't noticed the difference, so I just use water.

I hope you'll try this recipe - you will be amazed at how chocolatey and beautiful it is! Also, it's really easy to make and you'll make some chocoholic REALLY HAPPY!

If you do try it, make sure to let me know by tagging me on Instagram @anasbakingchronicles or tell me all about it in the comment section down below. Happy baking! 🙂 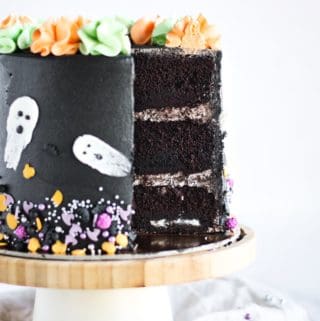 All the recipes are developed and tested using only metric measurements and a kitchen scale. The U.S. cup and spoon measurements are provided for your convenience, but I highly recommend getting a digital kitchen scale and measuring in metrics. It's easy and always guarantee the same results in baking!

The nutritional information and US conversions are calculated automatically. I cannot guarantee the accuracy of this data. If this is important to you, please verify with your favourite nutrition calculator and/or unit conversion tool.

I wrote a cookbook!

Hey there, welcome to my kitchen!

I’m here to share with you my favorite dessert recipes, with detailed instructions and tips&tricks for you to enjoy in your home.