I wanted to make this cake for sooo long. Actually, I made something similar last year, but didn't have a blog at the time.

Those black bananas on the counter were calling my name and I knew it was time for this delicious Dulce de leche Banana Cake - yum!

To be honest, I planned to make it for Easter. I actually baked the cake layers on Saturday, but just didn't have the time to assemble it with all the other Easter things going on.

So this poor cake was sitting in my fridge for 4 days before I actually decorated it.

All three layers were individually double wrapped in cling film and I kept the baking paper on them to minimize drying. I

admit, I was a little bit scared of how those banana cake layers were going to taste. But alas, I was worried for nothing! They were super, super moist!

I added some cinnamon to my banana cake layers because I think it just enhances that sweet banana flavour.

With that in mind, I had to put some cinnamon in my dulce de leche as well.

Do you know what dulce de leche is? It comes from Latin America and Argentina and its literal translation is: candy of milk. That's why I call it milk caramel!

And now you see how I got the idea to put some cinnamon in it. Milk and cinnamon? Dream combo!

For this cake, I adapted the recipe for dulce de leche from Bigger Bolder Baking. But if you don't feel like making your own, by all means use the storebought dulce de leche - it will still be so amazing!

HOW TO MAKE DULCE DE LECHE

Googling will give you two answers to this question.

Condensed milk is not widely available here in Croatia. Actually, there are some things that claimed to be unsweetened condensed milk - but I think that's just evaporated milk.

Either way, I opted for making dulce de leche from scratch. How hard can it be? Well, at least that's what I thought at the moment.

Although it's not hard to make, it is time consuming and you might end up with a total catastrophe in you kitchen.

Milk is fiddly and boiling it can cause a milk volcano eruption. Funny thing is - I know that. But, nevertheless, it has surprised me.

There I was, stirring my milk and sugar, keeping an eye on it for at least 10 minutes... then I decide to turn away to get something and BOOM. Game over. I turned away for a second! Literal second.

It erupted, it went all the way down into my oven... gross. Sticky. Complete catastrophe.

Lesson to be learned here? Never, ever, EVER take your eyes from milk that you're trying to boil. NEVER.

I kept it really simple. I made my vanilla buttercream frosting, only this time I added some powdered vanilla in it so I can see all those beautiful specks. But that thing is so expensive! A pack of 5 grams is 10 dollars, phew!

Nevertheless, it gives the frosting a beautiful flavour and looks.

When I think of decorating my cakes, I always think of things that are relevant to the cake. For example, I didn't just choose vanilla bean frosting because it's pretty.

No, I've chosen it because it goes so well with punchy flavours such as banana and dulce de leche.

Vanilla compliments those flavours beautifully by providing a sense of balance.

For making it extra cute, I made meringue kisses. I just love using them as a decoration because they are pretty and edible! And kids adore them.

I actually lightly sprayed them with edible gold spray but you can't really see it in the image. For a hint of what's hiding inside, I decided to put sweet banana chips on top. They also give a little bit of crunch to the cake! 🙂

LOOKING FOR MORE LAYER CAKES? HERE ARE SOME OF MY FAVES:

If you make this cake let me know by tagging me on Instagram @anasbakingchronicles or tell me all about it in the comments section down below! I love seeing your creations! If you have any questions, don’t hesitate to ask! Happy baking! 🙂 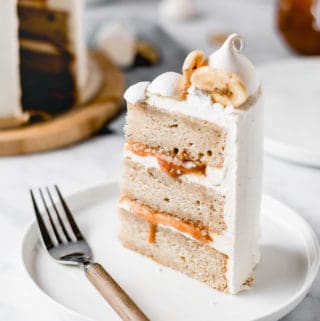 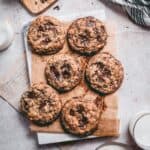 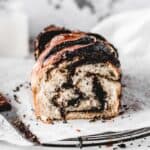 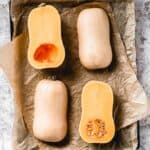 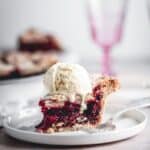 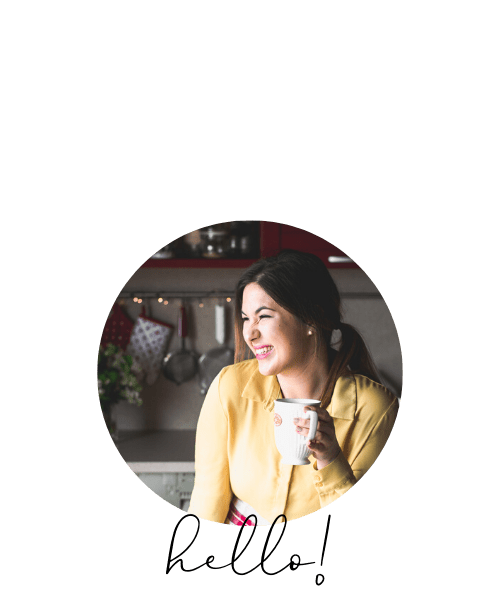 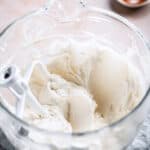 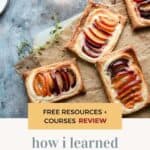