4.77 from 17 votes
These Belgian Liège waffles are made from brioche-like yeast-leavened dough with the addition of pearl sugar to create a delicious treat with a crunchy, caramelized exterior. Though they take some time to prepare, trust me when I say: they are so worth it!
Total Time⎪2 hours 55 minutes
Serves⎪15
Jump to Recipe Pin Recipe Print Recipe 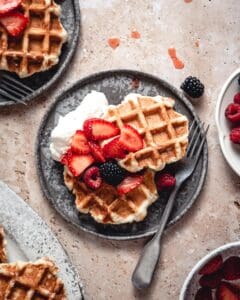 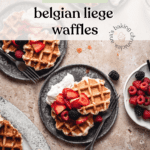 These Belgian Liège waffles are made from brioche-like yeast-leavened dough with the addition of pearl sugar to create a delicious treat with a crunchy, caramelized exterior. It's a perfect choice for a dessert, brunch, breakfast or even a party!

Look, I have to be honest and say that for years I thought that I didn't like waffles. Almost everywhere I looked there were only recipes that used a batter similar to pancakes to make waffles and I always found them too eggy and not at all what I imagined a true Belgian waffle to be.

It wasn't until a few years ago that I found this recipe on a popular Croatian recipe-sharing site that claimed to be an authentic one and it used yeast! Yesss! A win!

Since then, I played and adapted it to fit my preferences and came up with the Belgian Liège waffles recipe I'm sharing with you all today. It's a true gem that my family is obsessed with, so I'm pretty sure yours will be too! 🙂

The difference between Brussels waffles and Liège waffles

Both are obviously Belgian-style waffles because they come from Belgium, but a Brussels waffle is what you would typically imagine a "classic" waffle to look like.

However, neither is similar to American-style "Belgian" waffles because both are made with yeast as a leavening agent, instead of a simple batter made with baking powder.

Personally, I'm always up for a rich, chewy Liège waffle, than the one made with batter. I'm just a dough-loving person and I can't resist the perfection pearl sugar brings to the recipe. 🤷🏻‍♀️ If you're anything like me, you'll absolutely adore these!

Note: You have the fully written recipe with measurements and detailed instructions at the end of the post. However, I advise you to read all the helpful tips and FAQs.

Allowing the dough to get a slow second rise will result in waffles with a richer flavor as well as a dough that is easier to work with. However, the waffles are still insanely delicious when made after just one rise. 🙂

Note: If making the waffles right away, the dough will be a little bit sticky and soft, no worries there! It's how it's supposed to be. Just use 2 regular spoons to scoop the dough in the waffle iron. Traditionally, you would use Belgian Waffle Iron which creates deeper pockets, but mine (pictured above) worked great as well.

Unfortunately, Belgian pearl sugar is not easily available to everyone. In this case, I actually ended up using Swedish pearl sugar which is much smaller, but it did the job pretty well. Although it did melt and caramelized more than the bigger Belgian one would. It's mostly annoying only because of the cleaning of the waffle iron later. 😬

A very good substitute is to use sugar cubes. Just put them in a ziplock bag and smash with a rolling pin to get chunks similar to pearl sugar. It works like a charm!

These Belgian Sugar Waffles are incredibly delicious on their own and actually, that is how they are served in Belgium. However, you can serve them with some macerated fresh fruit (fruit mixed with sugar and left to release juices) and vanilla whipped cream as I did in these pictures.

Some other topping ideas include:

Like most dough-based sweets, these Liege waffles are the best when freshly made. However, they will keep good for a day or two in an airtight container at room temperature.

You can reheat them using a microwave or an oven, but it's possible you'll lose some of their signature crunch. Still delicious though!

Do you want to freeze some for later? I hear ya! These waffles freeze great. When they're completely cold, double wrap them in plastic wrap individually (so it's easier to portion later) and place in the freezer. They will keep for 2-3 months.

When you crave some, just pop them in an oven preheated at 150°C (300°F) for a few minutes until they're warmed up.

How to make your own pearl sugar?

It's super easy! Buy some white sugar cubes, put them in a ziplock bag and then bash with a rolling pin! I wouldn't recommend using a food processor because you can damage the blade, but also because it processes the sugar cubes too finely.

Can you make the dough in advance?

Yes! The waffles get even better if the second rise is slow in the fridge overnight, so if you want to have a great weekend breakfast/brunch, preparing the dough the day before is great! 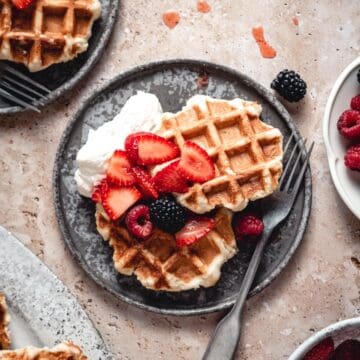 These Belgian Liège waffles are made from brioche-like yeast-leavened dough with the addition of pearl sugar to create a delicious treat with a crunchy, caramelized exterior. Though they take some time to prepare, trust me when I say: they are so worth it!

All the recipes are developed and tested using only metric measurements and a kitchen scale. The U.S. cup and spoon measurements are provided for your convenience, but I highly recommend getting a digital kitchen scale and measuring in metrics. It's easy and always guarantee the same results in baking!

The nutritional information and US conversions are calculated automatically. I cannot guarantee the accuracy of this data. If this is important to you, please verify with your favourite nutrition calculator and/or unit conversion tool.

I wrote a cookbook!

Hey there, welcome to my kitchen!

I’m here to share with you my favorite dessert recipes, with detailed instructions and tips&tricks for you to enjoy in your home.